Most of these prototypes are described in: “Prolegomena for a Transdisciplinary Investigation Into the Materialities of Soft Systems.”  In: ISEA 2017 Manizales: Bio-Creation and Peace: Proceedings of the 23rd International Symposium on Electronic Art. University of Caldas, 2017.

Digital Colonization departs from a desire to visualize today’s colonization of the individual’s lifeworld by pervasive ICT (information and communication technologies) as a means of grasping the continually accelerating pace of information dissemination. It consists of a tracksuit jacket equipped with EL wire (electroluminiscent wire) and a cell phone signal detector circuit. The EL wire displays a fluctuating pattern every time a cell phone or smartphone is active nearby. 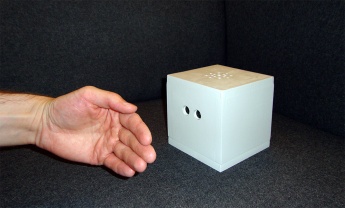 A small mobile white minimalist box equipped with a sensor that uses ultrasound to determine the distance to the closest object. When the distance is approx. 1.5 m the box starts generating and playing a random sequence of primordial sounds (Urlaut). The sound bites that make up the audio are the smallest intelligible segments of a recording of Kurt Schwitters’ sound poem Ursonate (1924-). The segments are played rhythmically at regular intervals the length of which varies according to the distance the ultrasonic sensor detects, speeding up as the measured distance decreases.

The piece was intended as a thematization of expressionism, phonocentrism, the authenticity of the human voice, presence, mediation, chance, and reproducibility. 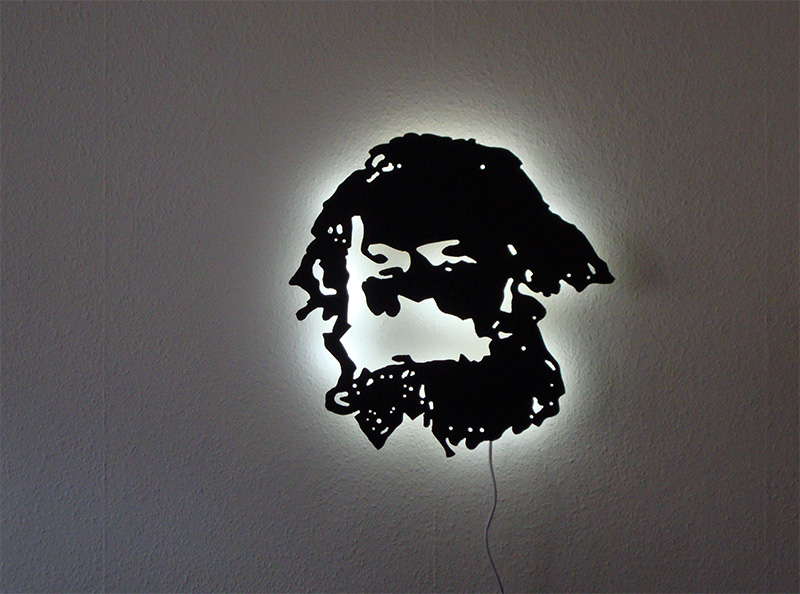 A couple of years back a strange digital image was making the rounds on the internet. The image was based on the optical principle of a so-called “afterimage”. Upon first inspection the visual content of this image was not recognizable, but when an observer looked at it (on the screen) for a while, and afterwards stared into a white wall an image of Jesus appeared (see: http://www.optical-illusions.info/illusions/Afterimage.htm). Hauntology (2014) is a wall piece constructed in fiberboard and backlit by LEDs. It utilizes the same optical technique of the afterimage to generate a different iconic image. The work hints at Marx’ status as a cultural icon as well as his continued function as a beacon of hope that another world is possible. Simultaneously the indirect mode of representation it makes use of is meant to invoke the current dichotomy between an immaterial cognitive capitalism prevalent in the West and the manual production of the global South, that the reproduction of Western societies depend on.

The glove was made as a prototype in conjunction with the ROCA seminar on ‘Prosthetics in art and design’ held at the University of Copenhagen, October 3, 2014 (program here: http://kunstogkulturvidenskab.ku.dk/roca/history/prosthetics-in-art-and-design/).

It is meant as a prosthesis that ‘hears’ distance and allows the user to experience distance through tactile sensations. The servo motor taps the users arm at a tempo that corresponds to the distance measured by the ultrasonic sensor, i.e. the tempo increases as the distance decreases.

A compact MAME cabinet equipped with a menu system and playable arcade games from the 1980s and 1990s. The machine can be hooked up to use a TV or projector as display. The request by the games to “insert coin” is bypassed by the press of a button.